The Convention on the Rights of the Child – the most widely ratified human rights treaty in history – is clear: Young people have the right to be heard and participate in all matters affecting them. But to what extent are these principles actually put into practice?

It’s not an easy time to be young. According to UNICEF, the COVID-19 pandemic is the greatest challenge faced by children and youth in 75 years, increasing poverty, entrenching inequality, and adding on to other pressing concerns: climate change, conflict, social injustice, and political instability. Young people bear the brunt of these hardships in their daily lives and will inevitably inherit all of the problem-solving these challenges require. More than half of the world’s population is under the age of 30 – the largest population of young people in history, with 2.4 billion between the ages of 10 and 29. Nine out of 10 young people live in less developed countries and are disproportionately affected by poverty, poor health, unemployment, violence, and exclusion.

This conversation focuses on the case for engaging young people globally and effective strategies for doing so. Evidence shows that involving children and youth as partners in problem-solving, development, humanitarian, and peacebuilding efforts contributes to economic growth, democratic progress, and social stability. The opposite is also true – when we fail to engage young people in addressing the matters that affect them, our communities and economies stagnate and decline.

This event is co-sponsored by the Collaborative on Global Children's Issues and the Georgetown University Center for Child and Human Development.​

Noor Almusahwi is a former unaccompanied refugee minor who spent time in the U.S. foster care system. He is a dedicated advocate for children living outside of family care. Mr. Almusahwi served as a Foster Youth Intern with Senator Jeanne Shaheen (D-New Hampshire) and advises a number of nonprofits serving vulnerable children and youth.

Ramatu Bangura is executive director of the Children’s Rights Innovation Fund (CRIF). Dr. Bangura is a lifelong advocate for justice, with 25 years of experience working with and on behalf of adolescent girls and youth. Prior to joining CRIF, she led the NoVo Foundation’s Advancing Adolescent Girls’ Rights initiative, the largest portfolio in philanthropy dedicated to the rights, leadership, and well-being of adolescent girls in the United States and the Global South.

Michael McCabe is the senior advisor on youth at the U.S. Agency for International Development (USAID). In his current role, Mr. McCabe is responsible for integrating youth engagement and development issues across the agency, overseeing implementation of the agency’s youth policy, and serving as a senior representative on youth issues with the interagency community. Mr. McCabe has previously worked with Creative Associates International as senior associate for capacity development and chief of party for the Panama Youth At Risk Program; at the Peace Corps he was chief of programming and training for the Inter-America and Pacific Region and deputy director for Peace Corps Dominican Republic. He has also worked with Youth Service America as vice president; the Inter-American Foundation as country representative for Mexico, Venezuela, Panama; and UNICEF as national programs officer for Dominican Republic.

Saji Prelis is the director of children and youth programs at Search for Common Ground (SFCG). He has over 20 years’ experience working with youth movements and youth-focused organizations in conflict and transition environments in over 35 countries throughout the world. In 2010 he co-founded and has been co-chairing the Global Coalition on Youth, Peace and Security, which successfully advocated for three historic UN Security Council resolutions focusing on youth, conflict, and peacebuilding. Prior to joining SFCG, Mr. Prelis was the founding director of the Peacebuilding and Development Institute at American University in Washington, DC. Mr. Prelis received the distinguished Luxembourg Peace Prize for his Outstanding Achievements in Peace Support in 2017.

Rosalind Wiseman is the founder of Cultures of Dignity, an organization that shifts the way communities think about our physical and emotional well-being by working in close partnership with the experts of those communities – young people, educators, policymakers, and business and political leaders. She is a curriculum creator and New York Times bestselling author. National media outlets regularly depend on Ms. Wiseman as an expert on ethical leadership, conflict, media literacy, youth culture, parenting, and bullying prevention. Ms. Wiseman has served on many national and local advisory boards and presents throughout the United States and abroad. In May 2022, she and co-author Shanterra McBride will publish Courageous Discomfort: How to have Brave, Life Changing Conversations about Race and Racism by Chronicle Books.

Gillian Huebner (moderator) is the executive director of the Collaborative on Global Children's Issues at Georgetown University. Huebner's work has focused on supporting the development, strengthening, and coordination of programs and systems to enhance community-based and nationally-owned approaches to building young people’s resilience and supporting children at risk. She has done this work with the UN, federal, state, and local governments, private foundations, public schools, and non-governmental organizations.

This event will be recorded and a captioned video will be posted to this page after the event date. Accommodation requests should be sent to globalchildren@georgetown.edu by February 21. A good-faith effort will be made to fulfill requests. 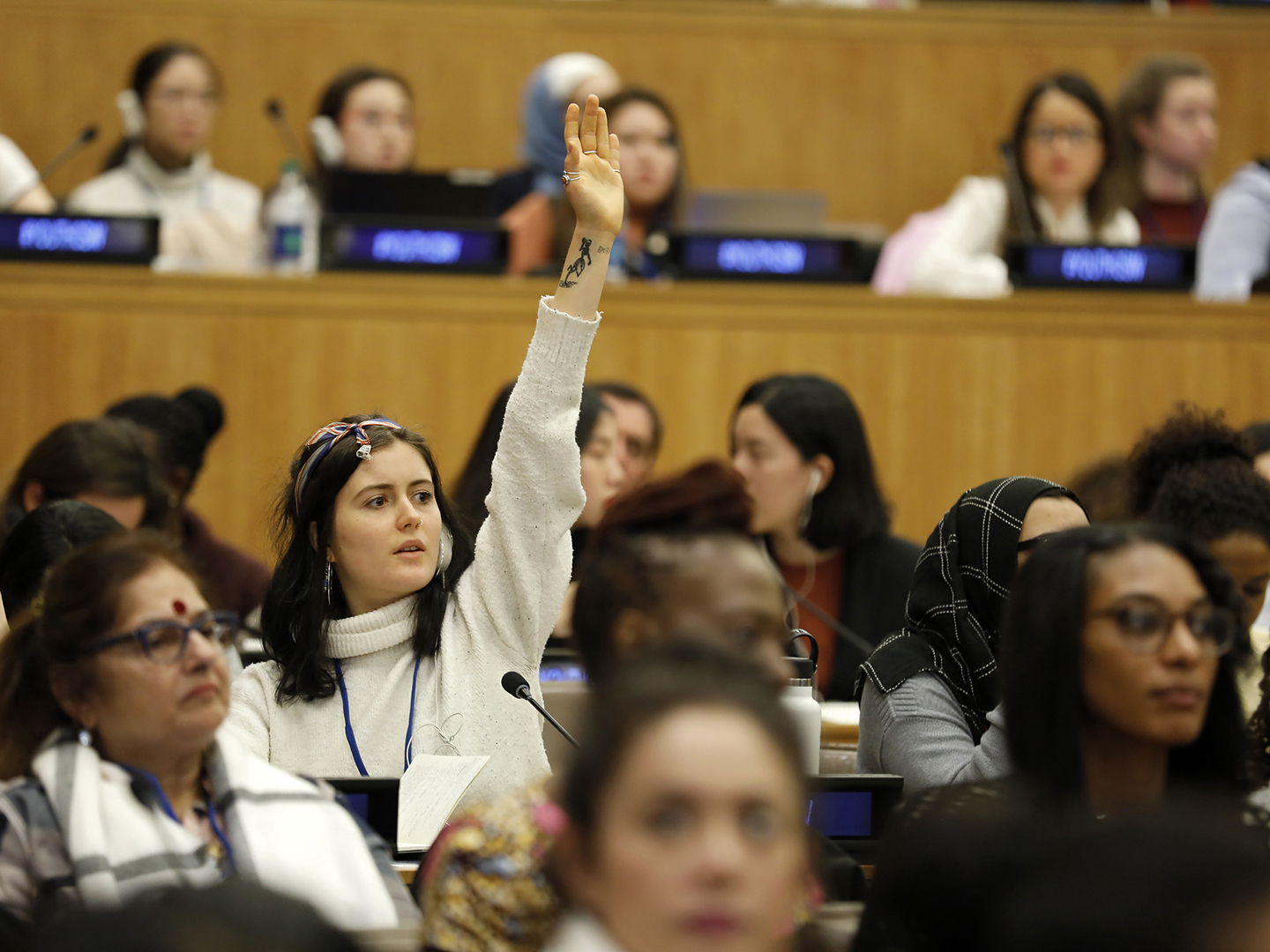 A girl raising her hand at a UN conference